One of the firm’s most significant commissions came in 1926, when Murrell & Pigott were asked to design a new Outpatients Hall for the Royal National Orthopaedic Hospital in Bolsover Street, W1. Now Grade II Listed, this Roman Classical building has a vaulted and coffered ceiling lit by a clerestory. It superseded an outpatients’ department located immediately to the north, and contains murals by painter, decorator and illuminator Katherine Anne ‘Nan’ West.

This commission proved particularly successful, and led the practice to receive a number of other significant commissions from the Royal National Orthopaedic Hospital in subsequent years. Upon its official opening in November 1927, the Kensington Post reported:

Entering the waiting hall of the new out-patients’ department of the Royal National Orthopaedic Hospital, which was formally opened on Tuesday by the Lord Mayor, one would imagine one was in an art gallery or in a high-class modern concert hall. There was nothing to suggest a hospital until perhaps one noticed the inscription “surgeon’s room” or “dressing room” on the highly-polished doors which lead from the hall to the various departments.

At a cost of £58,500, the new department, which is entered from Bolsover Street, immediately facing the rear of the hospital in Great Portland Street, reflects the most modern methods of treatment in completely equipped departments for massage, electrical treatment, exercises, light treatment, and X ray work. There are also surgical instrument and boot-making workshops.

The wall painting in the waiting hall, which represent the months of the year, were executed by Miss Nan West, daughter of the Chairman of the Hospital. 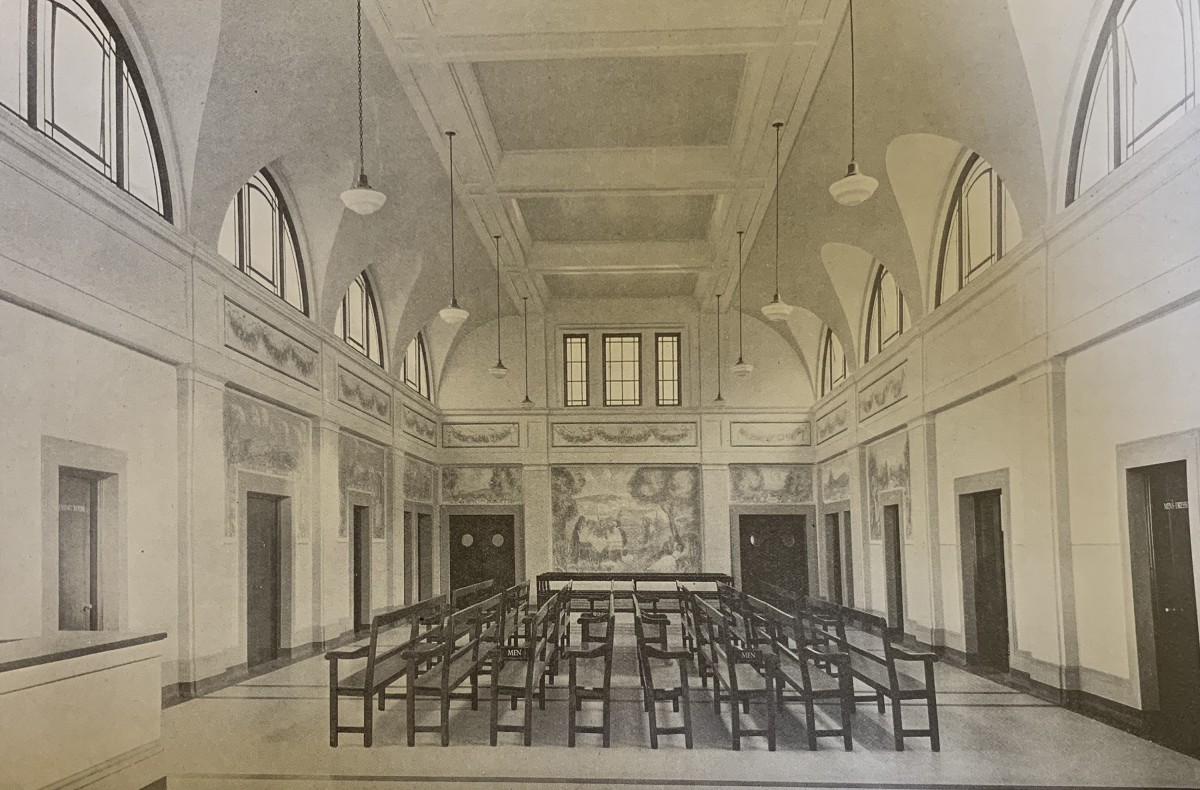 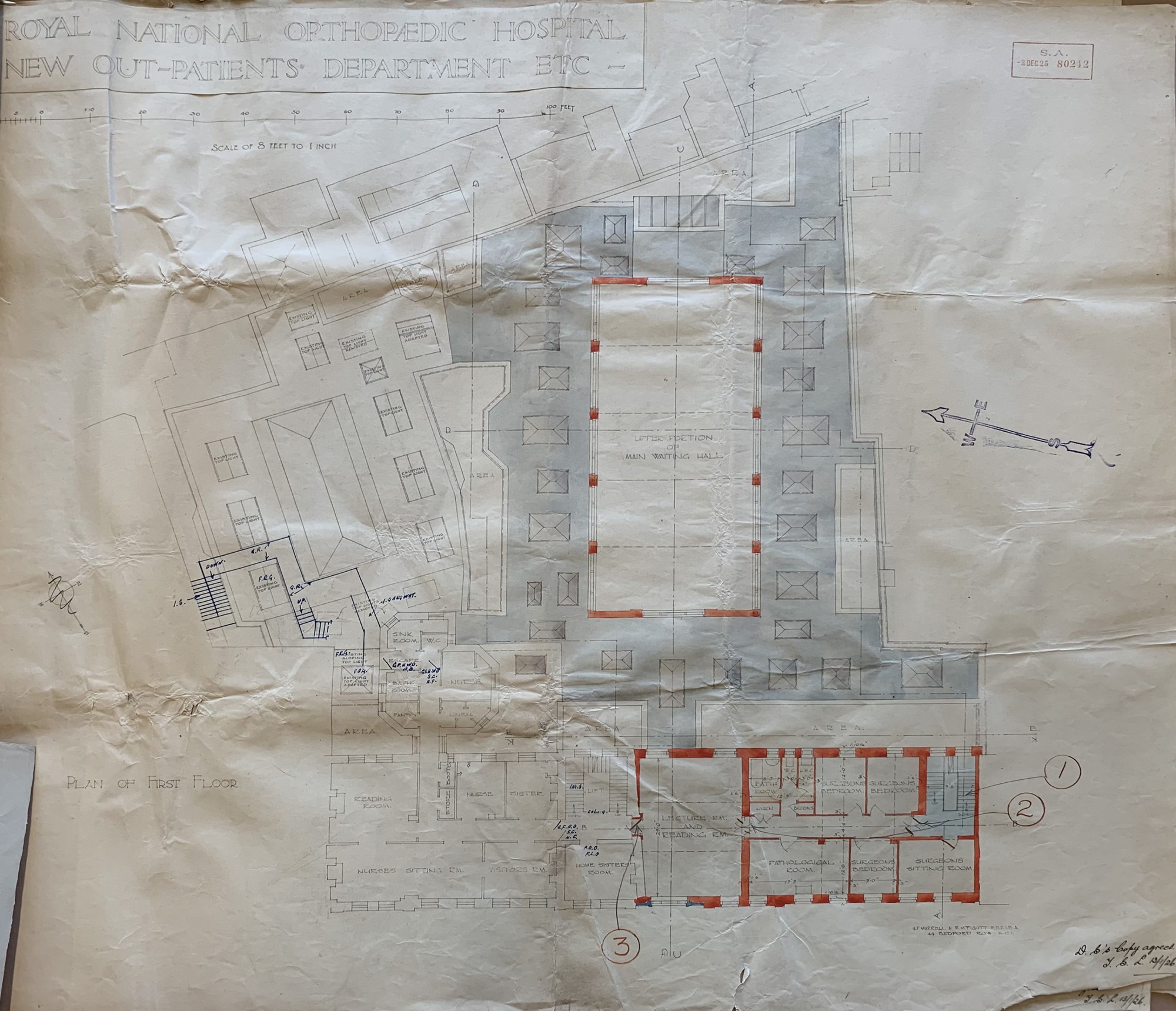 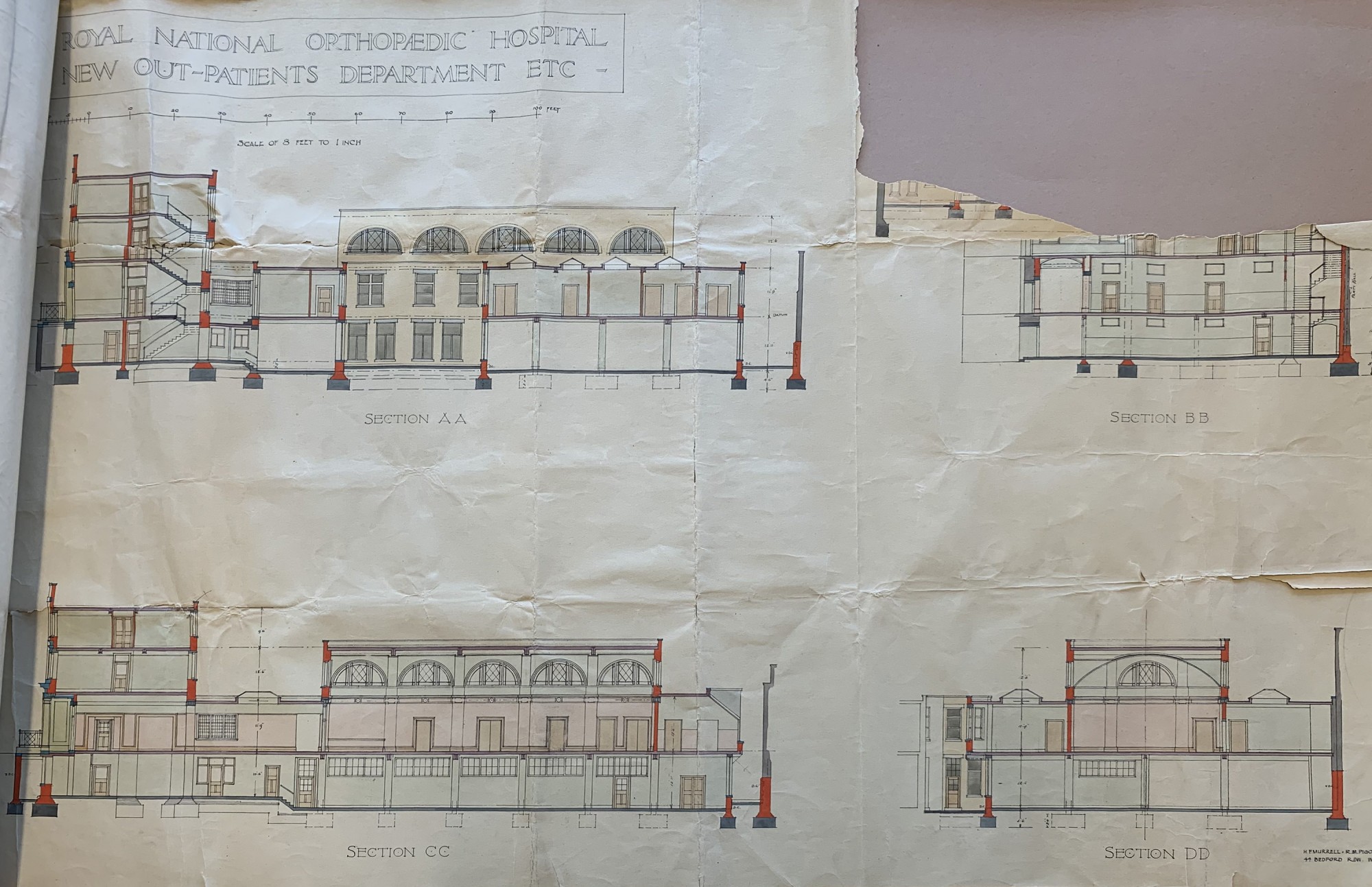 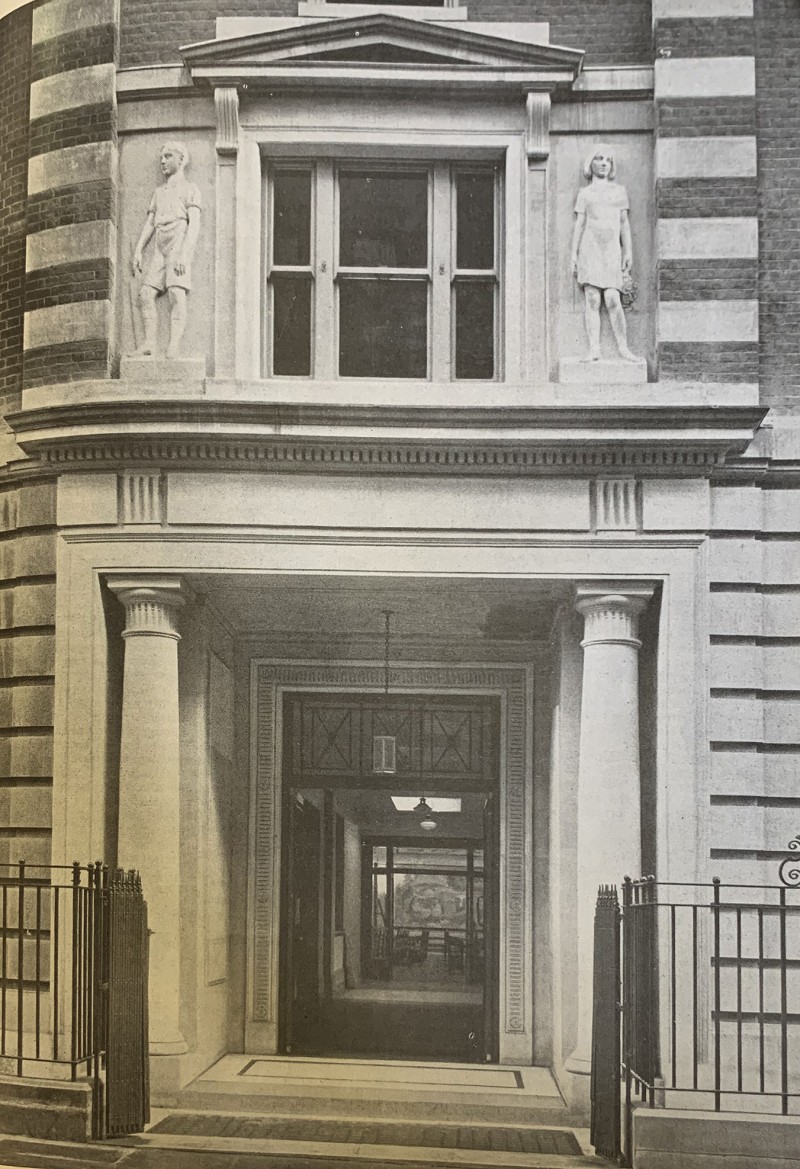 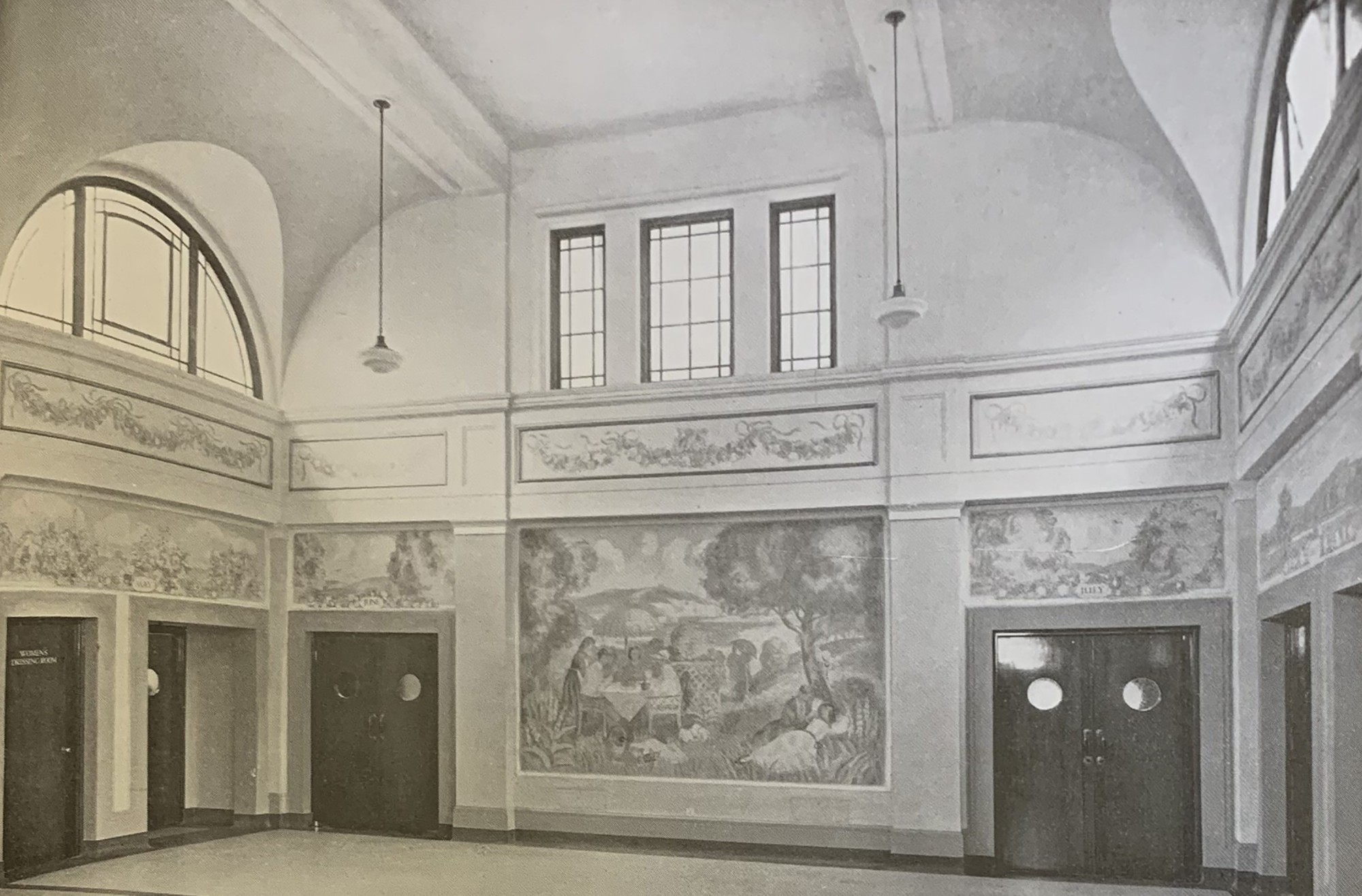 The listing describes the hall thus:

Waiting hall to outpatients’ department of the Royal National Orthopaedic Hospital. Built 1927 to the design of HF Murrell and RM Pigott, with contemporary painted panels in oil on canvas by Nan West. Built in grey brick. Roman Classical style.

Interior has vaulted and coffered ceiling, lit by clerestorey of metal-framed Diocletian windows with pale coloured glass, set in lunettes. Triple-light window to E end. Original pendant lights from ceiling. Pilasters between bays, pair of Tuscan columns to W, tiled floor. Entrances to consulting rooms set within each bay; that to first bay blocked, with broad, shallow-moulded architraves; some retain original veneered flush panelled double doors with porthole windows. Mural decoration of oil on canvas covers approximately 90 square metres. The principal subject matter is the months and seasons of the year, extending along entire length of N and S walls. The end (E) wall has the largest individual scene of figures picnicking in a landscape setting representing the theme of “Summer”. The other scenes are set within the bays between pilasters and above and to the sides of doorways. Upper areas of bays and below the windows have narrower rectangular panels displaying painted swags and floral decorative motifs. The style is influenced by French Post-Impressionism. The consulting rooms have been altered internally.

HISTORY: Built in 1927 as the waiting hall to the new outpatients’ department of the Royal National Orthopaedic Hospital. It superseded an outpatients’ department located in a block of 1908 immediately to the north. The original main RNOH building of 1907 in Great Portland Street ceased use in 1984. Katherine Anne (‘Nan’) West RA (b 1904) painter, decorator and illuminator, was the daughter of Henry West, Chairman of the Trustees of the RNOH. She trained at the Slade School of Art under Henry Tonks, who advocated ‘a vigorous defence of the traditional spirit in art’ and encouraged art students to paint murals in public buildings, thus restoring a social function for art. West’s career flourished 1922-37, during which time she assisted Rex Whistler in the decoration of the Tate Gallery restaurant and produced a smaller Noah’s Ark scene at the Child Welfare Clinic, Chelsea. Her murals for Simpson’s Tea Rooms in Piccadilly do not survive.

SUMMARY OF IMPORTANCE: Of special interest as a hospital waiting room with an intact mural painted scheme. This is one of the largest mural cycles of the time to survive in London and is an important example of Tonks’s policy to promote art in public spaces. The austere classicism of the architecture provides an elegant framework for Nan West’s informal painted scheme; the whole being an elegant and well-conceived composition. The murals have great rarity within a type which was never numerous and especially vulnerable to change. They also are an important example of a tradition of female mural artists working in the inter-war years whose work is highly regarded, such as Mary Adshead, Daphne Baring, Evelyn Dunbar, Mildred Edridge and Violet Martin. Other inter-war murals survive at the Tate Gallery restaurant of 1926, Morley College, Lambeth of 1929 by Edward Bawden, Eric Ravilious and Charles Mahoney (some destroyed by bomb damage), the village hall at Wood Green, Hampshire by Robert Baker and Edward Payne, Wimbledon Library and Brockley School between 1933 and 1936 by Charles Mahoney, Evelyn Dunbar, Mildred Eldridge and Violet Martin.

In the same year, another large project for the RNOH was announced – a ward block and solarium at the hospital’s Stanmore site. This project was illustrated in The Builder, December 7th 1929. 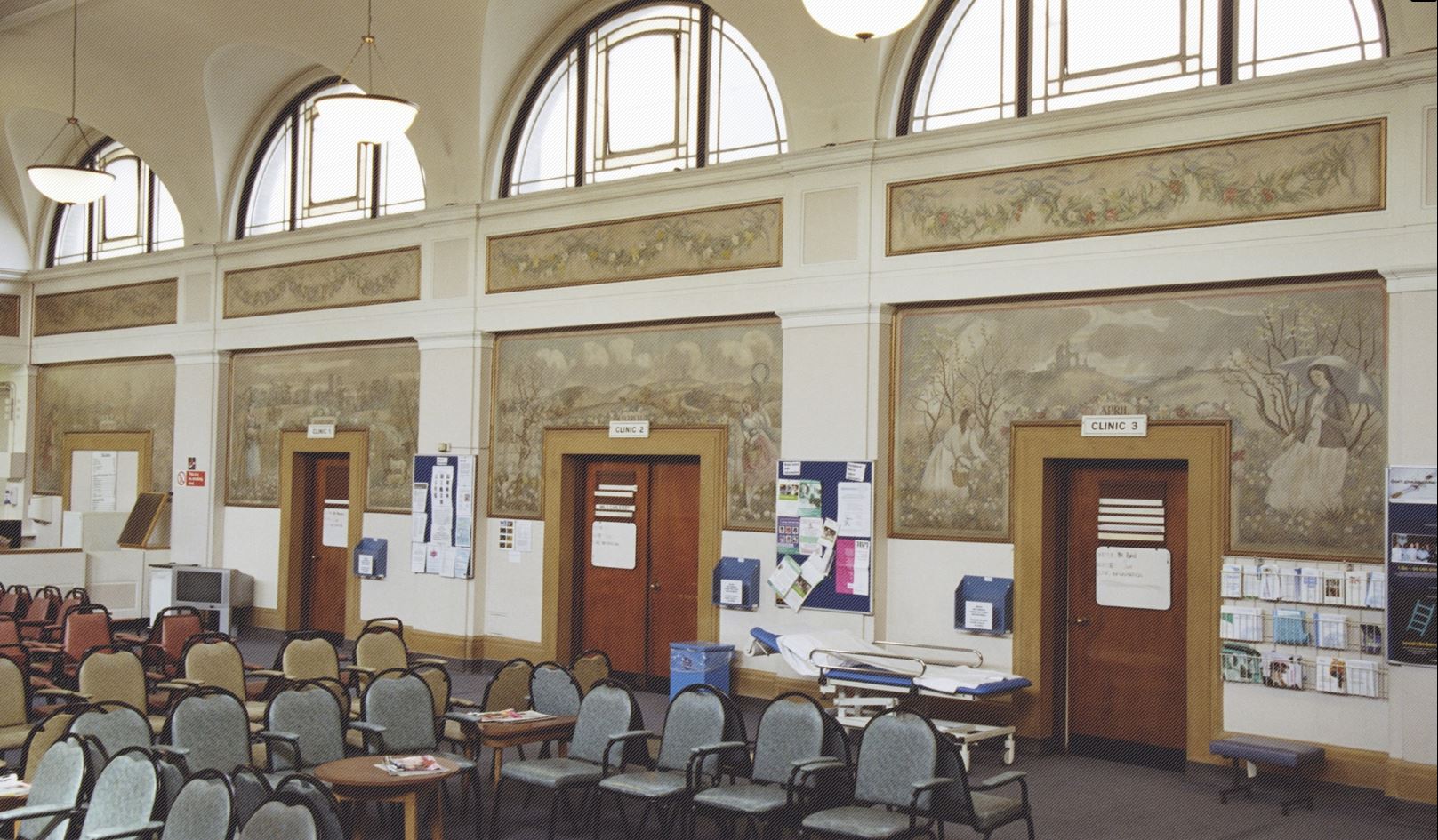