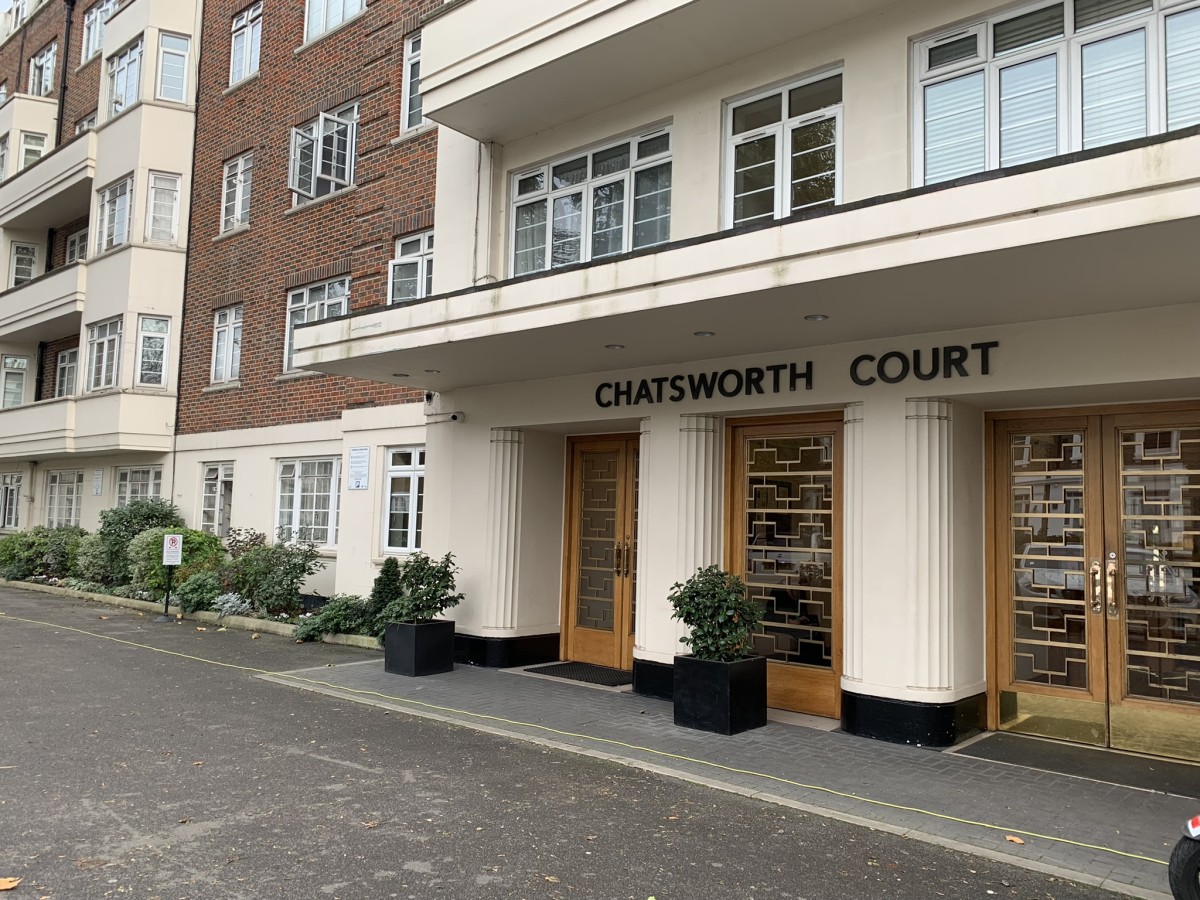 In the run up to our centenary we researched the history of the practice and one of the fascinating buildings we found a connection with was Chatsworth Court designed by Murrell and Pigott in 1935.  This handsome mansion block is splendidly located on Pembroke Road in Kensington next door to two other Mountford Pigott commissions – Marlborough Court and Cromwell Terrace, all characterised by their green glaze tiled roofs and 30s detailing.   We found some historic photos from the sales particulars and brochures and we were able to look at the outside of the block but we didn’t know how the interiors had fared over the years.

Just before lockdown I was in communication with the members of the board of directors and I was trying to arrange a visit but unfortunately Covid got in the way and it was only on Wednesday last that I finally got to see inside this treasure of a building.  I was kindly invited for a tour and tea by Frances Arkle, an architect who first bought into Chatsworth Court in 1975 and by Jenny Botsford one of the directors.  Frances owns a flat with many of its original features including original kitchen fittings and original bathroom tiles from 1935!  However, she lives in the squash court which was subsequently converted into a maisonette.  Jenny on the other hand lives in the converted dining room from the original restaurant.

There has been a very sensitive and considered refurbishment of the common parts with many original features retained in situ but as far as Jenny and Frances are aware, hers is the only originally fitted apartment.  Frances, in addition to being an architect is also a glass artist and contributed designs for light fittings, furniture and mirrors to complement existing features.  The result is truly evocative of the period and with my expert guides I received a vividly painted picture of what life was like in a 1930s mansion block in town.

All of the apartment doors retain their original ironmongery with its striking 1930s styling.  When I noticed these access panels along the corridor I assumed they provided access to services risers    – but no, it was explained to me – the upper hatch was where the milk and morning papers were delivered and the lower hatch was where the rubbish was taken from.  Inner hatch doors in each flat provided access (would have been ideal for Covid self-isolation).  Unfortunately, these were susceptible to burglary and had to be closed up more permanently but they’re still visible along all of the corridors.

The original “Peerless” kitchen fittings have been retained in Frances’ flat.  For the most part these are paint finished cupboards and drawers but there was one lovely feature which we should see more in contemporary kitchens – a larder front which folds down into a table top – and it still worked beautifully!  It is remarkable how little change has been required to bring this kitchen up to date with contemporary appliances.

The internal apartment doors are two-panelled with a high mid-rail so redolent of the period.  Frances had photos of the old electric heater and the original fire surround which doubled up as a drinks cabinet – you can see it in the original marketing material.  She kept the clock face from the original surround and reinstated it in her new home on the squash court… I didn’t take photos in the bathroom but be assured the green glazed tiles with green listello with a triangle pattern were also very 1930s in their design.

The handrails, light fittings, flooring, typography and Bakelite signage have all been kept along with the original dumb waiter (sadly no longer functioning) from which you could have meals delivered from the lower ground floor restaurant.   In the squash court the original flooring has been retained as it has in many of the common parts and in the dining room conversion to apartment.   Apparently the swimming pool was filled in during the war because it was feared that reflections from the water or the pale blue finish would catch the eye of pilots flying over.   The original sales particulars boasted country club living with central heating, constant hot water, restaurant, swimming pool, squash court and tennis court with a limited number of furnished flats available.  The central heating which was more akin to a district heating system was until recently shared with Marlborough Court.  The systems were separated in 2006 when the blocks were emancipated.  Sadly, the block has lost its original Crittall windows and while the replacements have a similar glazing bar pattern it is inevitable that modern frames with double glazing don’t get close to the original frame details.

One of the original common area kitchens has been converted into a services room but retains its original butler’s sink, tiling and some of the fittings for the dumb waiter.  Apparently, in the early days breakfasts were provided to residents too.  I gather that Chatsworth Court originally functioned a bit like an apartment hotel with leases as short as a week but there are also hints of co-living which we think of as such a new concept, but Richard Mountford Pigott got there 85 years ago!

It seems extraordinary that this development of some 200 apartments (originally 178) was drawn by hand by two architects… Jenny and Frances haven’t located all the drawings.  Apparently there were some at Kensington Library from which they took a single copy of the ground floor plan but the archive has subsequently been relocated to a destination unknown. 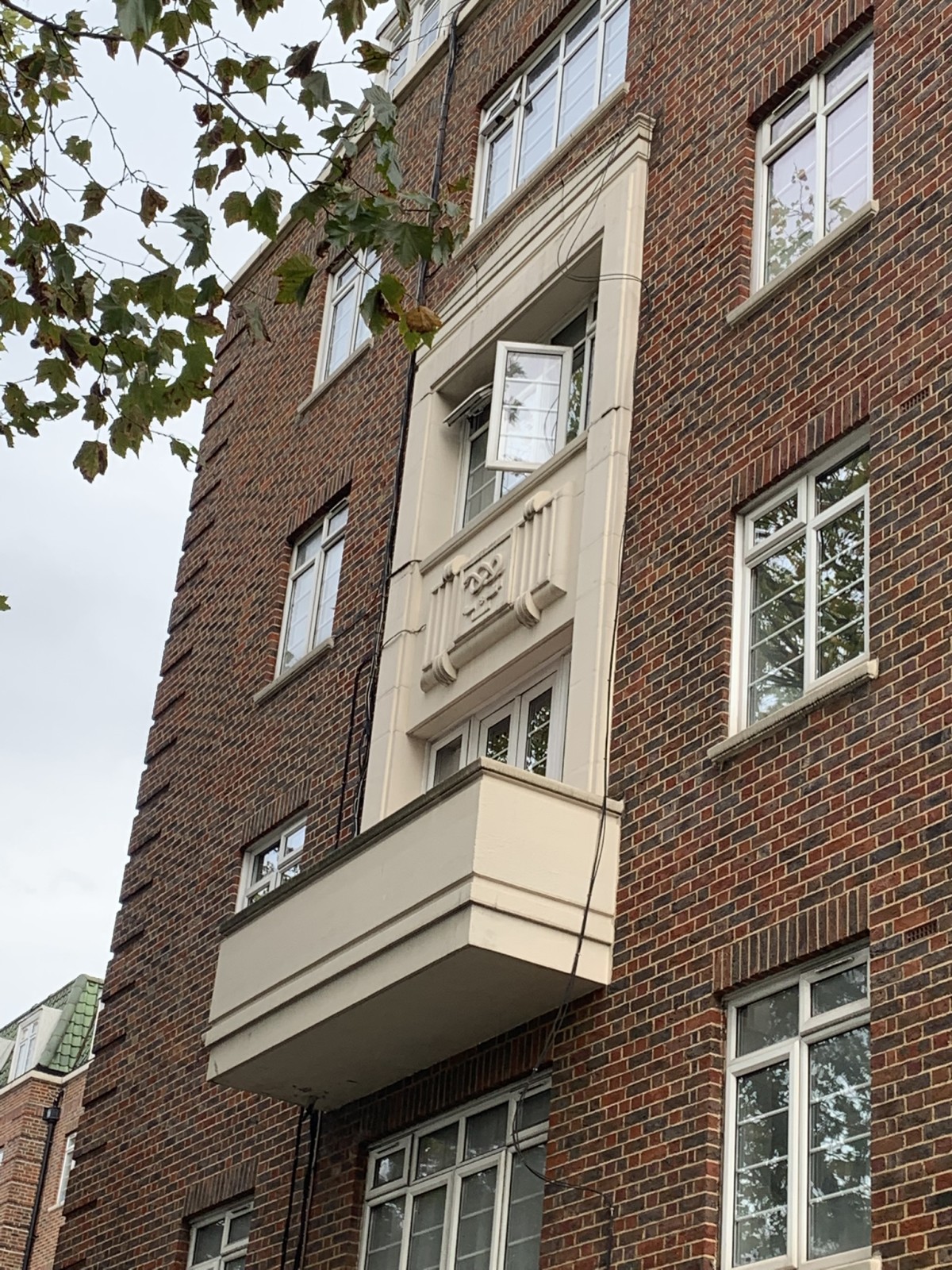 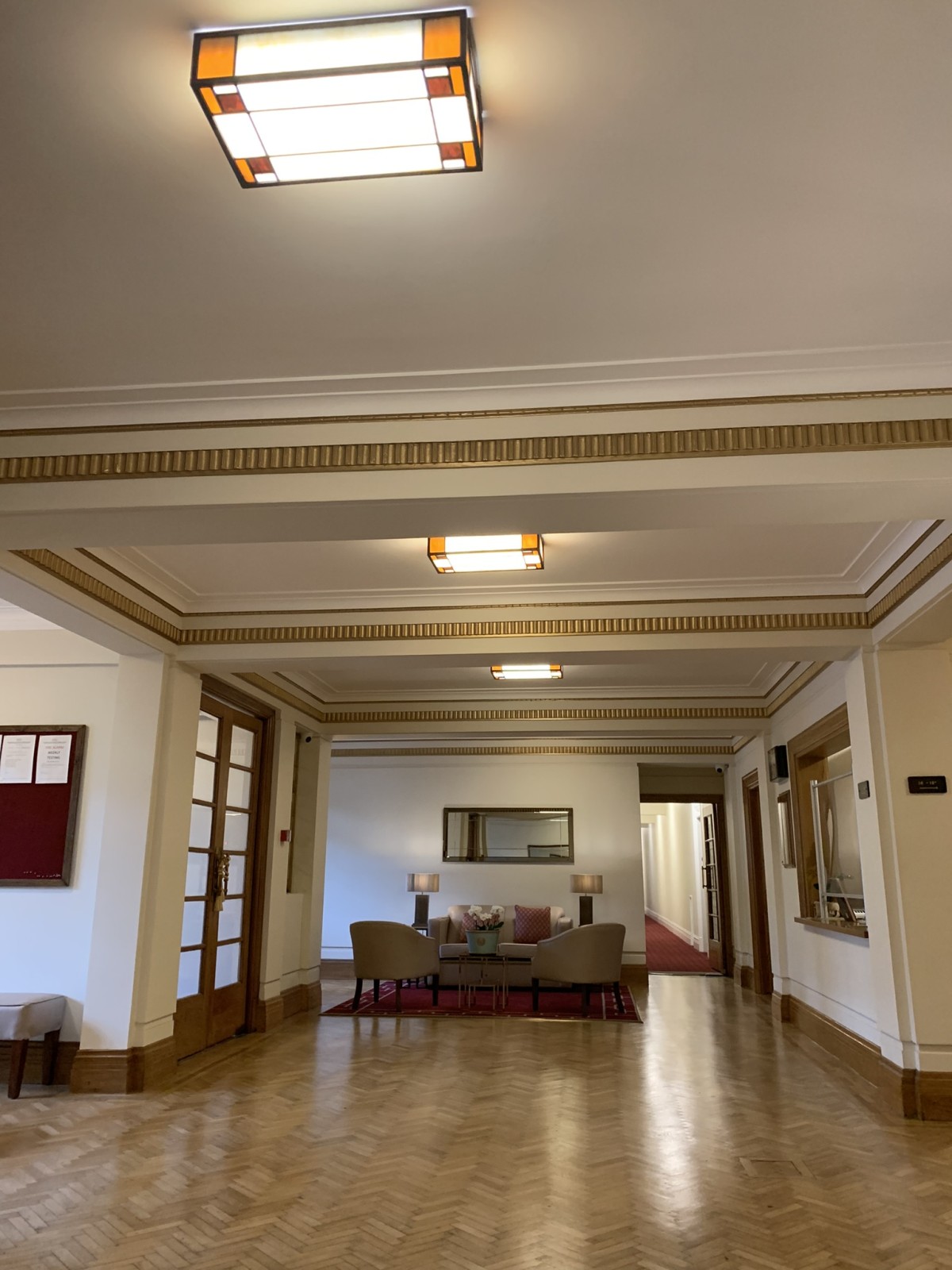 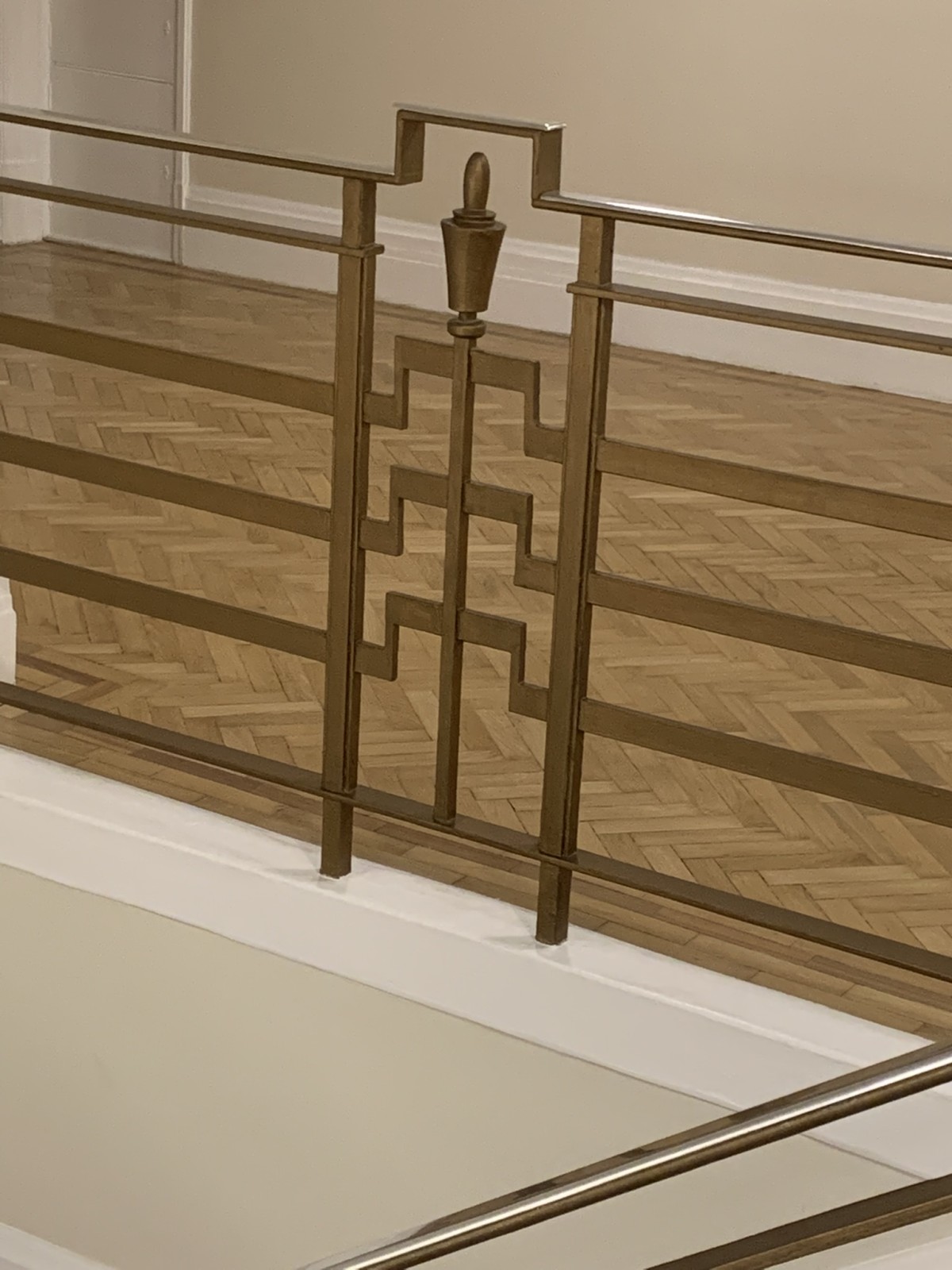